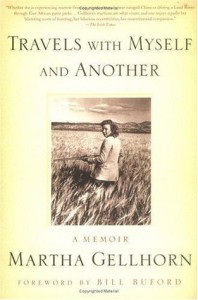 While I do want to read Gellhorn’s fiction and her nonfiction war reporting, I started with this collection of travel essays. I should say horror stories.

Gellhorn’s hatred of being bored frequently rousted her out of her comfortable home and sent her off to foreign lands. Often she was able to sell the idea for an article to cover expenses. In this book, written late in her life, she recalls some of her most nightmarish journeys.

In all but one, she sets off by herself. In that one, the first in this collection, she heads to China with her then-husband Ernest Hemingway along for the ride. She doesn’t name him, calling him Unwilling Companion or U.C. It’s 1941, Japan has joined Germany and Italy in the Axis, adding a new element to the long-running Sino-Japanese War.

Although the story alone is harrowing and often hilarious, one of its curious attractions is the window into conditions 80 years ago. Of the PanAm flight she says, “We few all day in roomy comfort, eating and drinking like pigs, visiting the Captain, listening to our fellow travellers, dozing, reading . . .” Not like any flight I’ve ever been on, except once when I was bumped up to First Class, when I frightened the person in the seat next to me by weeping my way through the last 50 pages of a tragic novel.

They stop in Hong Kong, much in the news these days, but back then:

. . . the working city of Hongkong [sic] at the base of the Peak looked as if nailed together hurriedly from odd lots of old wood and sounded like a chronic Chinese New Year. It was brilliant with colour in signs and pennants; the narrow streets were jammed by rickshaws, bicycles, people, but not cars; the highest building was an imposing square bank and it wasn’t very high.

The account of the flight over Japanese lines and the mountains in a DC2 is chilling—literally: “Everything froze including the air speed indicator.” And figuratively: The pilot judged air speed by opening his window a crack. “The passengers were given a rough brown blanket and a brown paper bag for throwing up. The plane was not heated or pressurized.”

The longest section of the book describes her solo trek around and across Africa, inspired by a vision of “a vast lion-coloured plain, ringed by blue mountains. Beautiful wild animals roamed across the land and the sky went up forever.” Ruefully she admits that she didn’t even understand the difference between conditions in west Africa and those in the east. Her naiveté lands her in one scrape after another as she traverses newly independent countries and others on the brink of independence.

Her prose is so clear and she does not spare herself or anyone else. Sometimes, though, I get a whiff of the appeal: stately giraffes drifting through the trees, majestic elephants, the blue mountains she’d dreamed of. In Kericho, at an English-owned hotel on a tea plantation reminds her of a “deadly respectable English provincial hotel”. But out on the terrace “the night sky told you exactly where you were . . . The far off stars were an icy crust; the darkness beyond the stars was more than I could handle. The machinery that keeps me going is not geared to cope with infinity and eternity as so clearly displayed in that sky.” A rare moment of introspection.

These stories are often hilarious, in the way that remembered horrors can be. Her description of wrestling a recalcitrant Land Rover over mountains, trying to read maps that bear little relation to what’s on the ground, while trying (unsuccessfully) to persuade her hired driver to actually take a turn driving seems funny now in the recounting but must have been frustrating and exhausting at the time.

The funniest tale is the one of going to Russia to visit an elderly writer whose work Gellhorn admires. A grateful letter became “pen-pallery”, leading to the writer begging Gellhorn to visit, claiming to be at death’s door. Once again, Gellhorn packed sweaters and warm clothes, remembering the winters in Russian novels, and deciding that the weather reports of temperatures in the 90s (F) must be a mistake. The writer’s tiny apartment is stifling, filled all day long with a crowd of friends coming and going, talking nonstop, only occasionally offering a translation. The bureaucratic run-arounds and the absurd restrictions are all presented with humor, while the real hardship of these people comes through with Gellhorn’s usual compassion.

I have traveled a lot, for work and pleasure, and have some traveler’s tales. These stories, while entertaining, make me glad to be at home.

Where have you traveled? What did you find there?

One thought on “Travels with Myself and Another, by Martha Gellhorn”