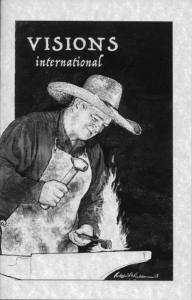 I first stumbled across this poetry magazine over a dozen years ago at the Baltimore Book Festival. What I love about it is the second word in the title. Visions solicits and publishes poems from all over the world. Strahan even travels to search out new poets.

It’s a small magazine, around 30 pages, but it packs a punch. This issue includes the work of poets from Slovenia, Dominican Republic, Hungary, Ireland, Chile, Macedonia, Iran, Mexico, Canada, and the U.S.

Their homes are identified in the table of contents but not on the poems themselves. As a result, when I read the poems, I’m struck more with the universal elements than with trying to see aspects of another culture.

One of the things I like about this magazine is that the translators are credited equally with the original poets. I tried my hand at translation a few years ago. Before that, I’d always been grateful to have translations so I could read work that would otherwise be inaccessible to me. However, it seemed wrong for a translator to tamper too much with the original work.

Once I tried to do it myself, though, I changed my mind. I wanted to capture the music of the original, the sound as well as the sense. I wanted to hint at the nuances in the other language, the connotations and associations. It was hard. And I admit I couldn’t resist making it a little bit my own. Since then I have much more respect for the work translators do.

Each issue also has a featured poet, with several pages devoted to their work. In this issue the featured poet is J.S. Absher of Raleigh, NC. One of his poems, “The Past and Time to Come”, starts with a cow grazing in a meadow and moves through the lovely names of their four stomachs into a scene where a salesman is philosophising about time in a bar. Sounds odd perhaps, but the juxtaposition works.

Visions is closing in on its 100th issue, so they must be doing something right. Check it out.

Where do you encounter poetry? In song lyrics or books? In magazines or blogs?