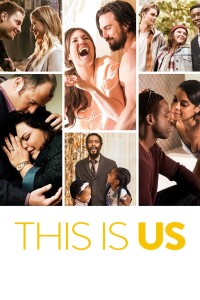 The object of this blog is to look as stories to see what I and other writers might learn from them. While nearly all of my posts are about books, this week I want to take a look at a television series.

A writing teacher I revere recommended This Is Us, specifically the episode titled “Memphis” as an example of excellent writing. That was enough to get me started. The series, now in its second season, has been nominated for and won many awards, including a Writers Guild of America Award for Episodic Drama for Vera Herbert for Episode 9 of Season 1.

It’s a family drama about three siblings and their parents. The show’s concept is that the father and the three children share a birthday. The pilot episode is their 36th birthday, so we move between the past of Jack’s birthday and the present of the siblings’. We meet Jack and Rebecca as they are enacting their traditional celebration of his birthday, hampered by Rebecca being massively pregnant with triplets. The bond between them, the openness, humor and compassion, are quickly established.

Our introduction to the three children as adults uses key details of setting to establish their conflicts. An overweight Kate opens a refrigerator to see everything marked with her own sticky notes telling her not to eat them. Randall, sitting in his corner office engrossed in his the multiple stock-tracking windows open on his monitor, is disturbingly low-spirited when his employees come in with a surprise birthday cake. Before we see Kevin, we see a sculpture of the comedy and drama masks, a poster for Richard III with the famous quote “Now is the winter of our discontent”, and a poster for a sitcom called The Manny showing a naked Kevin holding a baby. No surprise, then, that Kevin is collapsed on a bed, ignoring two women—hookers or groupies—and feeling sorry for himself.

Continuing to jump back and forth between the present and the past, the show anchors us by staying within that day, Jack’s 36th birthday when the children are born and their own 36th birthdays. Since we’ve already seen that Randall is not the same race as the others, I’m not giving anything away by explaining that after one of the triplets is stillborn, Jack and Rebecca adopt Randall who had been left at a fire station, thus setting up additional potential conflict.

A visual medium enables us to tell whether we are in the past or the present just by looking at the characters. As writers, though, we have to find ways to subtly establish when we are jumping into a flashback and when we return.

What I like most about the show is seeing how Jack and Rebecca rise to the task of parenting the three children, and how Randall, Kevin and Kate then carry those skills forward. There’s a lot of humor and conflict and love without, in my opinion, crossing the line into sentimentality. I love the way they talk to the children and Jack’s hilarious ways of distracting them. Jack and Rebecca find a balance between caring for the children and giving them space, something I see too rarely.

As a parent, I’m dismayed that with these excellent parents the three children should turn out to have so many problems as adults. However, conflict is the engine that drives stories, so as a writer I approve.

Another driver is suspense. There are many story questions raised in this opening episode. Some, like how Randall ended up in the family, are answered by the end of the episode. Others, like Randall’s relationship with his biological father, are resolved by the end of the season.

However, there is one major question which is still being milked even though we are well into the second season. In the present of the series, it has been made clear that Jack is dead, but how and when is a big mystery. There were a lot of teasers last season that the final episode would reveal the answers. When it didn’t, I wasn’t the only one disgusted. My friends who watch the show felt betrayed, and at least one quit completely.

Similarly, I’ve heard readers complain about novels that leave too many questions unanswered at the end in a clumsy attempt to set up a sequel. Deciding the right moment to reveal information and answers is one of the hardest tasks for a writer. If you put it off too long, you will lose the reader’s interest; too soon, and the suspense fades. One good suggestion is that every time you reveal the answer to one question, you ask another.

Be aware, too, that if you are going to make something into a big mystery and keep teasing and holding off on answering it, you are building up expectations. When you finally do reveal the answer, it had better be spectacular. And if it’s a TV series you’d better—right away—set up another big question or your viewers will wander off.

Is there a TV series you recommend for its writing?