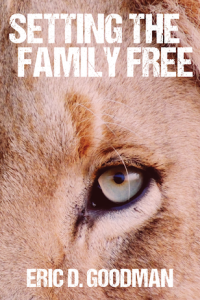 This latest novel by my friend Eric Goodman, author of Tracks and other stories, takes us to Chillicothe, Ohio where Bobbie Anne Thompson looks out of her kitchen window and sees a tiger attacking her horses, killing and eating one even as she calls 911.

She knows where it came from: her neighbor Sammy Johnson has been collecting exotic animals for years. As much of a hoarder as he is with his guns and cars, Sammy has collected 60 or 70 animals (reports differ), including lions, cougars, bears, tigers, leopards, panthers, wolves, komodo dragons, monkeys. And now he has turned them all loose.

One of the things I love about this novel is the compassionate insight Goodman brings to Sammy, the animals themselves, and the various men who must hunt them down before they kill any more people. Though the female characters are all secondary, I was disappointed that they are not presented with the same insight as the men.

Another thing I admire about this book is the unusual format. Chapters with traditional scenes alternate with sections made up of snippets of quotes from various people, and sometimes with news articles. This combination speeds up the pace of the story and plunges us into the terrible race to save the citizens of central Ohio. The hunters are rural police officers, aided by a couple of animal experts. Already horrified at what they must do, they are hampered by the questioning and accusing voices of those sitting safely far away. Their job is also complicated by the obliviousness of those who continue hiking and walking to work and taking children to playgrounds despite the urgent warnings to stay inside.

Though the prose is not difficult to read, the content—human and animal killings—is probably too upsetting for middle grade level. However, this book would be appropriate for a Young Adult (YA) audience, and would be a great starting point for a discussion of our relationship with animals.

It’s a fascinating premise for a story, contrasting the way Sammy and his wife view the animals—as family, as their children—with the way others view them, including the animal experts, the citizens who’ve lost family and pets to them, the animal lovers who aren’t actually being threatened by them, and the first responders caught in the middle.

There is not a clear protagonist for this story. We dip in and out of a number of points of view, including various members of the responding officers, Sammy and his wife, and several of the animals.

Equally, no human antagonist has been identified. The closest is an ambitious reporter who takes the low road: inciting anger at those taking on the difficult—physically and emotionally—task of killing the animals. This reporter whips up the public with opinionated pieces using words like “massacre” and unrealistic claims that the animals could have been tranquilized instead of killed, all of this in the hopes of furthering their career, and maybe leading to a high-level job in New York.

You’ll notice I used gender-neutral terms. One concern I have with this novel is that the author makes this reporter, who is putting their own career ahead of the safety of citizens and first responders, a woman, thus joining in on the way our society attacks women for behavior that is considered normal for men. In our society, ambitious and powerful women are derided and demonized. I know the author and I know that he is not misogynistic, but I wish he had not chosen to egg on the misogynists by perpetuating this negative stereotype.

I’m not advocating censorship. But I do believe that authors should take responsibility for the effect their work may have on our culture. They should think carefully before employing negative stereotypes.

We all should be rethinking how we view others, questioning stereotypes, not leaping to conclusions based on inaccurate and emotional reporting, just as we should be rethinking how we view animals. As we learn more about animal intelligence, we begin to question the idea that we should have dominion over them. This book is a valuable step in opening that conversation.

Have you read a novel that made you question a long-held opinion?