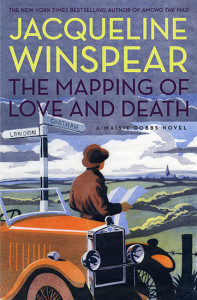 Like many readers, I enjoy books that are part of a series. The initial plunge into the story is easy because the main characters are familiar, as is the world of the story. Winspear’s series featuring Maisie Dobbs starts in 1929 when Maisie sets up in business as an inquiry agent in London.

I find her a a delightful person to spend time with: calm, resourceful, full of common sense. She, like most of her generation, bears wounds from the Great War even ten years after the Armistice, at the start of the series. Her physical scars from the bombing of the medical station in France where she served as a nurse have healed. But her beloved Simon, a doctor who was more seriously injured in the same bombing, remains alive in a nursing home but brain-dead.

The other effects of the trauma she endured in France are heightened by the evidence of the war’s damage around her: the veterans who litter the streets, maimed in mind or body or both, often unable to find work; the women left without prospect of marriage after the decimation of a generation of men; the economic hardship and social uncertainty of a nation still measuring the cost of what’s more a cessation than a victory.

She also occupies a peculiar spot in England’s class structure, which at the time is still rigid if beginning to fray. Born to working class, she was placed in domestic service at 13, not uncommon at the time. However, once her employer Lady Rowan discovered Maisie’s yearning for education, she began supporting the girl’s education, roping in Maurice Blanche, a family friend who eventually trained her as a detective. Equally at home downstairs and upstairs, Maisie went on to enter Girton College, before leaving to enlist as a nurse.

In this outing, the seventh in the series, Maisie is hired by a wealthy couple from Boston whose son was killed in the war. His remains have just been found, a farmer having accidentally uncovered the bunker where Michael’s unit died under bombardment. Letters that he had on him, safely wrapped against the elements, indicate that he’d been having an affair with a nurse, and Michael’s parents are eager to find her to learn anything more about their son.

Taking on the task, Maisie must navigate the past, calling forth echoes of her own ordeals, as well as the present, with all of its dangers. Someone does not want her to succeed. She and her assistant Billy Beale are kept busy tracing out the various tentacles of the investigation while dealing with their own personal challenges.

The challenge for the writer of a series is that each book must show development of the main characters while at the same time ensure it can stand alone. There must be enough information from past books so the new reader is not lost, but little enough that the dedicated reader is not bored.

Winspear is adept at working in nuggets of explanation just when they are needed. I’m also becoming more appreciative of the character arc of Maisie across the series, as well as that of other characters, such as Billy Beale and his family, Lady Rowan and her family, Maurice Blanche, Maisie’s contacts at the police, and her one close friend Priscilla Partridge.

I started reading the series when it first came out, but lost track of it for awhile. Now I’ve started at the beginning and am reading straight through: a writer’s worst nightmare! Reading them in quick succession instead of waiting a year or more between them should make me quick to spot inconsistencies and be bored by duplicated information.

Instead, I have to marvel at the author’s artistry. I find Maisie’s development as a person even more fascinating than the cases she’s investigating—though there’s no lack of suspense and puzzles there. The real puzzle lies in us, the way each of us navigates our lives. This book, like the others in the series, demonstrates deep psychological insight combined with thorough research into the time period.

I admit it was my fascination with the Great War that first led me to these books, and they continue to add color to my own studies. But it is Maisie Dobbs who keeps me coming back.

Is there a series of books that you’ve particularly enjoyed?