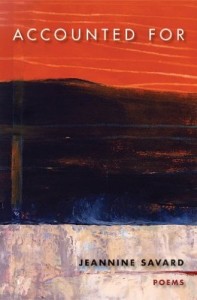 A chorus of voices fill this 2011 collection of poems from Red Hen Press. People crowd the pages, alone or in company, describing prayers and portents, dreams and deserts. Savard uses the things of this world—donkeys, gold silk, stars, wild thyme—to ground emotions and epiphanies. Like Virginia Woolf’s “moments of being”, each poem holds a cup of liquid light.

However, much as I reveled in individual phrases, sometimes the objects and images came too fast for me, piled on top of one another, without enough context for me to follow.

I first understood what appealed to me in poetry when I read Robert Bly’s Leaping Poetry. He says:

My idea, then, is that a great work of art often has at its center a long floating leap . . . The work can have many leaps, perhaps shorter. The real joy of poetry is to experience this leaping inside a poem.

Graves maintains that the leap enables the reader to access the unconscious. He calls it “a leap from the conscious to the unconscious and back again.” While that may be true, I instead think of it as being given the space to bring my own experience, my own emotions into the poem.

I love when two images come up against each other, the liminal space between them resonating with sounds neither can summon on their own. Similarly, an artist can lay down two strips of color on canvas and where they meet, our eyes see a spectrum of colors faintly vibrating. For example, in one of my favorite poems, “In a Radiant Field”, Savard says:

Touching her own ribs
she overhears the years of a tree

before the lightning struck.

She gives us a moment to hold these two images, of ribs and rings, and let them echo before summoning the lightning strike.

However, too much obscurity, too much private meaning invested in the image leaves the reader stranded on one side of the gulf. As Bly says of Neruda: “The links are not private, but somehow bound into nature.”

In several of the poems in this collection, the gaps are sometimes too wide for me, rendering the poems impenetrable. Perhaps there were allusions that I didn’t recognise or my brain couldn’t move fast enough. Bly goes on to say:

Thought of in terms of language, then, leaping is the ability to associate fast. In a great ancient or modern poem, the considerable distance between the associations, the distance the spark has to leap, gives the lines their bottomless feeling, their space, and the speed of the association increases the excitement of the poetry.

Other poems, with time, yielded meaning. “Ekstasis”, for example, conjures in cascades of images the experience of different kinds of music, the sound of the words as important as the images themselves, such as “Acoustical honey” and “Nine parrots come pecking at the foot of the porch stairs.”

As writers we struggle with finding the line between saying too much and saying too little. Certainly, as readers we want to do some of the work, not be spoonfed, but finding that line can be difficult. Trusted readers can help. I rely on my critique group to let me know when I haven’t provided enough information or am being too obvious.

To make it even harder, individual readers bring their own preferences and experience to a poem. I’ve participated in a poetry discussion group for several decades, enjoying the opportunity to explore in depth the work of a different poet every month. A side benefit has been hearing how others react. Tastes vary wildly. People interpret words, phrases, images differently. Their disparity has nothing to do with right or wrong, good or bad.

I found many of the poems in this collection difficult. When the juxtaposition of images worked for me, I experienced the excitement Bly describes. Always, I appreciate the vividness of her descriptions and am happy to immerse myself in the music of her words. I love, too, the way she tests the barriers, trying to surmount what holds us apart. As she says in “Sky Treasure”, our history is the “cry of so many hungers, / no boundary in between.”

What excites you in a poem?