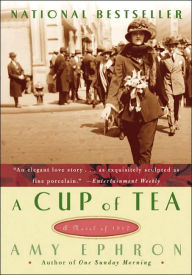 I once read a novel where a man enters a room and the woman there, who has never seen him before, just says, “Yes.” And she goes with him, even though she is married and has two children. I was at a susceptible age, young and a bit cynical, and wondered how that could even be possible, to recognise someone in that first moment.

I found out later that it was indeed possible, though I couldn’t explain how. Perhaps it was the circumstances; perhaps the way he looked or the sound of his voice, the peculiar scent of his skin. I don’t know.

Such a moment occurs in this slim novel, based on a short story by the same name by Katherine Mansfield. On a shopping expedition in New York City, wealthy Rosemary Fell sees a young woman standing under a streetlight in the cold rain. Moved by a surprising impulse of generosity, she invites the destitute woman home with her for a cup of tea.

Navigating the concerns of her driver, her housekeeper and her best friend, Jane, Rosemary presents the girl with a dry change of clothes. Before she has decided how far to go in befriending the girl, Rosemary’s fiancé arrives. Philip immediately notices the strange girl who is studying him. After being introduced, he takes Rosemary to another room to find out what is going on. Although unconvinced by his lecture on the unwisdom of bringing home strange girls, Rosemary does return and sends the girl—Eleanor Smith—away.

It’s 1917 and many of society’s mores are changing. The U.S. will soon enter the Great War, sending men overseas and disrupting lives even as comfortable as Rosemary’s. The story follows these four characters, Eleanor, Rosemary, Philip and their friend Jane.

While it seems like a simple story, the complexity of the characters and the intensity of the times give it depth. Rosemary is no empty-headed debutante, and Jane’s motives only gradually take shape. Although of a good family, Philip has had to build his shipyard business from scratch. And Eleanor is a bit of a mystery. A woman who has reinvented herself, perhaps more than once, she moves through the months, taking shape herself along with the story.

People sometimes argue the difference between character-driven novels and those that are plot-driven. To me, the best novels are like this one, where plot and character are fully integrated. Things happen; people change; larger themes of class and materialism lurk around the edges: I couldn’t ask for anything more. And the setup, a moment of just saying yes, was entirely believable to me.

What story have you read that resonated with your own experience?