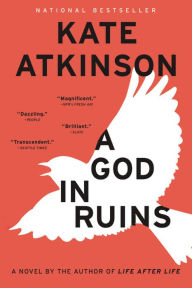 Best title ever. And since you cannot copyright a title, it’s been used before, by Leon Uris in his 1999 novel about a presidential election. I haven’t read Uris’s book, but according to some reviews, the story gets lost in the single-minded hammering of the author’s political views.

The title comes from “Nature”, a poem by Emerson:

A man is a god in ruins. When men are innocent, life shall be longer, and shall pass into the immortal, as gently as we wake from dreams.

Why am I going on about the title when there is a book to discuss? And it is a book by one of my favorite authors. Because I thought it a shame to see Atkinson’s brilliant wordsmithing wasted on such a miserable story.

This book is a companion piece to Life after Life, her novel exploring the many lives of Ursula Todd, which asks: what if when we die, we get to go back and try again? And so we return over and over to a snowy night when a baby is born, with a longer or shorter time to go before death comes to reset the game. Aside from one bratty brother, the characters around Ursula are not unpleasant: a large family in a comfortable country home waited on by a few servants. Their rather ordinary joys and sorrows change slightly with each go-round, some permutations lasting long enough to thrust the family into WWII and bleak post-war England.

It’s a neat trick, certainly, and well-handled, but not a story that touched me or moved me particularly. I was slightly interested in the way Ursula’s previous lives began to push through the veil, manifesting themselves as odd impulses or déjà vu. Atkinson can make a scene incredibly vivid, but any emotion conjured up is quickly dashed away. Death begins to mean no more than the buzzer at the end of a video game before it starts up again. With the stakes lowered to almost nothing, the events of Ursula’s life, each life, lose all significance. The drama fizzles out, leaving the story curiously flat.

Let me say it again: Atkinson is an incredible writer. I could pull passage after passage to show you what I mean. But the book as a whole just seemed like a bloodless experiment.

I hesitantly began this companion book, which follows Ursula’s little brother Teddy from adulthood into old age, dipping repeatedly back into his experiences flying a bomber in WWII. Again, individual scenes are brilliant. However, the story never took off for me. The characters seemed nothing more than chess pieces being moved about to demonstrate the clever structure.

Without do-overs, the stakes should have seemed higher for these characters. Teddy, after all, faces death day after day during the war. Yet, although a confident and successful pilot, he is an oddly empty person, letting things happen to him, accepting what comes without a murmur. Not a bad philosophy in wartime when pilots didn’t survive long, but not making for an interesting protagonist to follow through several hundred pages.

The other main character is his daughter Viola, a horribly selfish and nasty person without a single redeeming characteristic. Atkinson gives her every negative stereotype of a hippie boomer: rebellious, wearing sandals year-round, making inedible vegetarian meals, neglecting the two children she’s named Sun and Moon, just to list a few. Even if all I knew of hippies and boomers were the labels used to mock them, I could not accept such a flat, uncomplicated beast as a real person.

I recently read Elizabeth George’s Playing for the Ashes, which features a similarly crude, rebellious and angry young woman. She has devoted herself to making her parents and herself miserable, perhaps even causing her father’s fatal heart attack. But by the time we meet her, she has come to love one person, though she cannot yet admit it to herself, and the animals he cares for. That’s all it takes to make her seem real.

Viola simply loathes everyone and everything. Near the end, we are given a possible reason for her awful behavior; perhaps if it had appeared near the beginning I might have been able to see her as more than an ugly cartoon. Atkinson’s vivid writing makes Viola’s beastliness into something truly atrocious, as when for example we are plunged into Sun’s misery when he is sent to live with his father’s cruel parents because Viola can’t be bothered with having him around. The author is able to work her magic by giving us Sun, previously only seen as a brat, in all his complexity of competing needs and desires, even while leaving the grandparents as simple monsters.

Great writing, but in service to what? I know the book has gotten some rave reviews. I thought the best parts were of Teddy’s wartime experiences. The other sections gave me that sensation of chess pieces being cleverly—if somewhat obviously—manipulated. I’ve loved Atkinson’s books ever since stumbling across Behind the Scenes at the Museum. All the more disappointing then that A God in Ruins, like its companion novel, seems more like an intellectual exercise than a novel. Still, it’s a wonderful title.

Have you ever chosen a book primarily because of its title?