A literary magazine from the University of Tulsa, Nimrod sponsors several writing contests. This issue (Volume 62, Number 1, Fall/Winter 2018) features the winners of the Pablo Neruda Prize for Poetry and the Katharine Anne Porter Prize for Fiction. Unusually for such magazines, this issue also includes the work of those who won second prize, finalists, semi-finalists and those who received honorable mention. Also unusual is that most of the poets have several poems, not just a single winning poem.

I’m mightily impressed with this volume. Overall, the quality of the work is high, and several of the stories and poems are outstanding. For example, finalist Susan Nguyen’s poetry carries surprising images and brings music to writing of dreams, language and history.

I particularly like finalist Mimi Lok’s story “Last of Her Name”. The tale moves effortlessly through time, carrying the past into the present, following a daughter and her mother as they navigate the dangers of being a woman in our sometimes violent world.

Another story I liked is finalist Ellen Furman’s “Things” in which the narrator Kat, about to move cross-country is persuaded to leave her desk, a family piece with great sentimental value, with a stranger. Kate becomes fascinated by Anya, “the keeper of things”, a Russian émigré whose tract home is crowded with things she is storing for others as well as her own acquisitions. What secrets do we carry? What role do things play in our lives?

Several poets included the words of others in their poems, adding a context to their personal imagery that moved me deeply. For example, first prize winner Emma DePanise wrote of Anna Bertha Ludwig. Semi-finalist Lee Sharkey brought together writings of May Stevens, Rosa Luxemburg and Virginia Woolf to stunning effect.

Submitting to literary contests has its pros and cons. You are guaranteed that someone will at least look at your work. There may be a cash prize as well as publication. On the downside, fees to enter the contest add up quickly.

The best strategy is to research magazines to see which ones publish work similar to yours. Before the internet, that was an expensive proposition, but these days you can usually read a sampling online.

Another strategy is to find a ranking of literary magazines to prioritise your submissions. For example, Cliff Garstang’s methodology for ranking magazines is based on how often they publish work that wins Pushcart Prizes.

Something I look for is how often magazines publish women, people of color, and writers of different ethnicities. The Vida count is an invaluable resource here.

A final strategy I employ is that when I come across a story or poem by someone whose work seems similar to mine is to check their author biographies to see where else they have been published.

Do you read any literary magazines? Which ones? 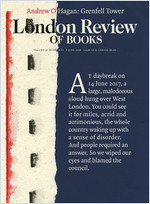 I subscribed to the London Review of Books for the book reviews. I liked that they were longer than the couple of paragraphs usually allotted to a book review, and that they often placed the book in the context of the author’s oeuvre. Sometimes the long-form reviews told too much of the story, but that wasn’t a deterrence if I was truly interested in the book. I also became adept at skipping over those parts.

Over the couple of decades I’ve been reading the LRB, I’ve been a little dismayed at the increasing number of political essays they’ve been including. Sometimes I skip over them, but others have been useful in delivering in-depth portraits and histories of what is going on in the rest of the world, sadly neglected these days in U.S. news sources.

Still, I was surprised to find that an entire issue (Volume 40, Number 11, 7 June 2018) was devoted to Andrew O’Hagan’s piece on the Grenfell Tower fire.

I’d heard of the fire, of course. Managed by the local council, London’s Grenfell Tower provided high-rise low-income housing. On 14 June 2017, safety measures intended to isolate fire failed, and a fire in one apartment quickly spread through the 24-story tower. Firefighters were unable to contain the blaze, and 72 people died.

Accusations came thick and fast. Most people blamed the council, saying that they only cared about the predominantly wealthy neighborhood and not the poorer people, especially those in the tower. Some residents had been complaining for years about various problems and, as a result, the council had conducted a major renovation, completed the previous year, 2016, that among other things installed new windows and a new composite cladding on the exterior of the building.

In England, local councils provide some of the functions of local government. Elected councilors are responsible for overseeing things like education, libraries, social services, waste collection, and housing; but hire contractors to actually perform the work.

O’Hagan’s piece, researched intensively for a year, tells the story of some of the people who lived there. With six flats on 23 of the floors, you would think people would be strangers to each other, but as resident Alison Moses says, “‘It’s a funny little community . . . Everybody knows everybody, at least by sight.’” It was also a remarkably multicultural community. O’Hagan says, “There was scarcely any floor on which more than two families were born in the same country.”

I found the individual stories which make up the bulk of the article fascinating: their backgrounds, their joy and pride in their homes in Grenfell. But what really struck me about this piece was the political fallout.

Activist groups immediately blamed the council, claiming that they had cut costs by having defective cladding installed; they hadn’t responded to tenant complaints, and they did nothing to help tenants during and after the fire. These cries were taken up by the media swarming the site and quickly became the dominant story about the fire. However, when O’Hagan interviewed these activists, they provided pages of accusations, but no actual proof.

When he interviewed council members, he found that they were on the ground immediately and in force, setting up shelters and getting people there. As one council officer said,

We were organising food, transport, data and donations, as well as accommodation. Our staff were in all day. And we had all gone home that Wednesday night exhausted and switched on the television news to learn that we hadn’t done anything.

The problem was that they hadn’t identified themselves as council, their philosophy being to just get the job done and not make a fuss about it. As a result, no one realised who they were. A senior council officer said,

The first full day after the fire, a survivor was being interviewed by somebody in the media, sitting beside one of our social workers who had been with her since she escaped The media were keen to press her about the council. “The council don’t care,” the woman said. “They’re not doing anything.”

And at the end of the interview the social worker turned and looked at her. “Why did you say that?” she asked. “I’ve been with you since the beginning.”

Similarly, the issue of the cladding—the culprit in the spread of the fire—was hardly the council’s fault. It is not their job to verify it met safety standards; that had been privatised to a company that “both recommends the standards and tests them in the marketplace, while also being entwined with many of the companies whose products they are testing.” The blame lies with the lack of industry regulations, the lack of independent testing, and the contractor’s omission of a fire safety inspection—it turns out the cladding had been tested “on a desktop, but never properly in situ.” Also, this cladding was already in common use, installed on many other low-income housing around the country.

The government, eager to distance themselves from the catastrophe, put the blame on the council as well. They made things worse by promising the public things that they knew the council couldn’t deliver.

I could go on, but the chilling thing for me, in this era of fake news and hollowed-out journalism, is how quickly a false story can become “the truth”, not just among the chanting crowds who ignore right-wing politicians’ lies, but among progressives as well. We need responsible journalism more than ever. And we need to attend to our social reputation, the only thing the council neglected. Your reputation is everything, as my mother used to say.

How can we best manage our reputation in this age of social media and devolved journalism?

Cleaning out a box, I came across this copy of Calyx: A Journal of Art and Literature by Women. I’m not sure where it came from, but I could tell right away that I had never read it. The opening story was so gripping, I knew I would not have forgotten it.

In “Goulash”, by Anna Balint, the fourteen-year-old narrator is in Budapest, Hungary with her parents and younger brothers visiting Uncle Zoltan and his family: Auntie Eszter and their daughter Gizi. They are all on their way out into the countryside, a trip Zoltan didn’t want to take and Eszter is still angry about. But Mum fought for it, Mum who refuses to speak Hungarian, who claims she is “English, English, English.” There is much here about language and heritage and what we choose to remember, about denial and loss, all wrapped in a story full of enticing scents and sounds, the taste of apricots and hot peppers, singing in the night, and outstretched hands.

The poetry in this volume, too, is stunning. Each poem resounded deep within me. Such innocent images at first, drawing the reader in, ever further in, through forests of joy or comfort or peace. Take “Doorpost”, by Laurie Patton:

There is a lightness
when we cross a threshold—
. . .
No matter the sorrow,
every door holds a hope

And then the memories summoned by the room’s objects begin to multiply, memories of joys and losses, of days past, days that can seem like a future—all conveyed in just a few lines. And then the final lines subtly tie these memories to the image of the door, the threshold, the liminal space between past and future.

There is art here as well, black and white photographs of paintings and sculptures, starting with four pieces by Leah Kosh that seem to unearth hidden memories in me, truths I once knew but have let slip away. Kosh says, “My paintings most often explore the belief that there are a multiplicity of realities co-existing and that these realities are our shadows and our mirrors—always with us, rarely acknowledged.”

Four substantial reviews of books by women close the volume.

Each piece in this issue is a gem. I am stunned by the quality of the works and their diversity. There are stories of a girl who sees her absent mother as a star floating in a pond, of a young woman whose boyfriend’s age seems to be going backwards, of an older woman who has suffered one too many accidents. There are astonishing poems about crows and dancing and walking in the dark.

There are hundreds of literary magazines out there. I used to subscribe each year to a different one, until I hit a rough patch timewise and decided to get through the backlog before continuing. However, there has always been one so consistently good that I’ve continued to subscribe to it and read year after year.

I think I’ve just found a second one.

What literary magazines have you enjoyed reading?