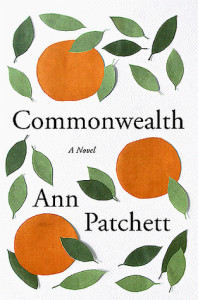 This 2016 bestseller has received lots of good reviews. It begins with an unexpected and uninvited guest arriving at the christening party for Franny, second daughter of Fix and Beverly Keating. Bert Cousins brings a bottle of gin as a present, something unexpected and unusual at a christening. As the party goes on, everyone gets drunk; most people behave badly; a priest gives up his vocation; and Bert, who has a pregnant wife and three children at home, falls in love with Beverly.

I was ready to stop halfway through this first chapter. I’m not a fan of stories of people behaving badly. I don’t find them funny, which is why I rarely watch any sitcoms. Yet many people have loved this book, according to Goodreads and various book reviews, and my book club had chosen it, so I plowed on.

In ten or so stand-alone vignettes like the first chapter, the story zigzags through the lives of the Keating and Cousins families. Two drawbacks of the book are the sheer number of main characters and the huge jumps in time and space from one chapter to the next. It was sometimes hard for me to figure out the chronology and also to keep track of which child belonged to which pair of parents.

The children’s lives are upended by the reckless decisions their parents make. The parents continue to neglect them, not just their emotional life but even their physical safety. At one point, the parents finally show up at the children’s motel room at 2 pm, saying that they “slept in”. What kind of parent does that?

Unsurprisingly, the children are little monsters. Left to their own devices and hating their parents, they entertain themselves by embarking on dangerous expeditions, drugging the youngest child with Benadryl, and carrying around Dad’s loaded gun.

I liked the vignettes where the children were older much better. Well, mostly. At least one, like some of the childhood vignettes, reminded me of a bad sitcom with things getting worse and worse, beyond the outer limit of credibility, with no humor to lighten it.

This is supposed to be a novel that explores blended families, which have become common as the divorce rate has soared. Yet the Keatings/Cousins families seem so cartoonishly awful that it is hard for me to see any useful insight into the concept. It’s not the blending of families that is the problem here; it is the selfishness of some of the four parents. It’s not as if we need another illustration of narcissism these days.

It’s also supposed to be a novel that explores the ownership of stories. Who gets to tell the story of your childhood? As a memoirist, this question is important to me. Patchett has said that she drew on her own memories to write it. And, to add some meta- to her fiction, she has included a much-older famous writer who becomes young Franny’s lover, listens to her stories, and then writes a novel based on them. The impact of the lover’s novel on the families is explored toward the end of the book, and was the part most interesting to me.

What kept me reading, besides my book club, was the structure. I was curious as to how these unconnected vignettes would hold up as a novel. For a long time it felt like a novel in stories, that is, a series of short stories only marginally related. But by the end, I did feel that the book cohered into a single novel.

Besides featuring the same eight characters throughout, Patchett accomplished that by her consistency of tone. One Goodreads reviewer complained about the tone, saying that it was distant and formal. I agree that it kept the reader at arm’s length. But I liked that. Usually I prefer to be immersed in a novel and live the story with the main character, but in this case, given these characters, I was happy to observe them from afar.

As always, these remarks are my own. Many, many people adored this book, and it got overwhelmingly positive reviews. To my surprise, most of these reviews talked of the humor the book, even citing some of the set-pieces that most horrified me as the most comical.

I think the difference is that I know parents like these and children like these, so I found the story heart-breaking rather than hilarious. I’m reminded of the time in my teens when a group of friends insisted I watch the sitcom All in the Family with them. I left at the first commercial break, near tears. To them, Archie Bunker and his family seemed so exaggerated as to be funny. To me, they were too close to my own family for me to be amused.

Have you read one of Patchett’s novels? What did you think of it?