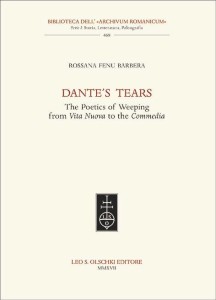 Sometimes you find a book that answers questions you didn’t know you had. This book roused my curiosity about many things, not just Dante and tears, but also silences, numerology, medicine, and religious beliefs during the Late Middle Ages.

Earlier this week someone mentioned a history professor she once had who hated the sentence: “Things were different back then.” When I read these works of Dante’s back in my schooldays, that’s probably why I didn’t question all the weeping that goes on in them. As it turns out, though, the cultural context for tears really was different from today’s.

I haven’t read Dante since then, though of course I’ve encountered references and bits and pieces of his work over the years. Still, I had no trouble following Dr. Barbera’s explanations of the various meanings of tears during that time and how this understanding illuminates Dante’s most famous works. (Full disclosure: I have known the author for over ten years, first as a teacher and then as a friend.)

By tracing the way Dante presents his own tears and those of others, the author demonstrates how Dante’s philosophy and world view developed over the 26 or so years he spent writing these works. In Vita Nuova, where he first meets Beatrice,:

Dante’s confused and distressed state of mind is not merely emotional or decorative. It embraces the very essence of the book, the writing of which seems to be motivated by Dante’s finding a new path in life, finding his new life . . . Vita Nuova is the stage on which Dante represents his struggle to define the truth of Love, to test positive and negative behavior. Vita Nuova was the occasion, in Dante’s life, to discover a new poetic; in a way, it is the paradise and wood where Dante gets lost.

The Commedia, in which Dante travels through Hell, Purgatory and Heaven, demonstrates Dante’s evolution to a more nuanced understanding of love and death, sin and redemption, and to a new poetics to express them. He more subtly uses different kinds of weeping to describe whom he meets and what he learns during his time in Hell and Purgatory. For some he meets, tears are a relief or a means of atonement. For others, they are a terrible punishment.

For example, Dante reserves the ninth and lowest circle of his Hell for traitors, those who broke the political order or society’s rules, which to him meant betraying the community itself. I was struck by the current relevance of this verdict, centuries before Rousseau published The Social Contract, which describes how citizens are willing to surrender some of their freedoms to the government in exchange for protection of their remaining rights.

Confined with Lucifer in a frozen lake of tears, these traitors are not allowed to weep, and therefore not given any way to relieve their sorrow or to petition God for forgiveness. If they do cry, their tears are frozen in their eye sockets, their heads tilted back. By delving into the significance of tears and Dante’s poetic use of them, the author brings home the true horror of these punishments and the depth of Dante’s scorn for these traitors.

I was also particularly interested in the history and meaning of the sin of acedia, better known today as sloth. However, it is more complicated than laziness. What we now call sloth was understood as a medical problem related to melancholia and tristitia (sorrow) until the “first Christian thinkers . . . began to associate diseases with or to explain them as a product of vice and sin.” When first identified as one of the seven deadly sins, it was considered “an inertia of the spirit” seen among monks who shifted their attention “from spiritual aspirations to earthly appetite.”

The relevance to today is obvious. As massive problems beset our society—problems we feel powerless to solve—it is tempting to bury our heads in the sand, whether by binge-watching television shows, video games, retail therapy, or focusing on personal ambition. Even though Thoreau’s “To be awake is to be alive” has been my motto since my teens, I am not immune; the lure of my book-lined room is sometimes irresistible.

In Dante’s Purgatory, acedia is the middle of the seven plateaus, separating the sins “that cause harm to others (Pride, Envy, and Wrath)” from the sins of “excessive love of earthly goods (Avarice, Gluttony, and Lust).” It is “intended as the mother of all temptations”. The exploration of Dante’s uses of weeping helps us better understand Dante’s struggle in this crucial area, the centerpoint of the entire Commedia and how we ourselves might move forward with open eyes.

Drawing on over a hundred sources, the author summarizes research and scholarship. She goes further and adds her own conclusions, clearly expressed and supported by the journey she has taken us on through the beliefs and worldview of the late 13th and early 14th centuries. Like the most satisfying of jigsaw puzzles, the pieces of the author’s argument slot together and yield a fascinating new portrait of Dante, his times, and his works.

Nearly all of the academic writers I know loathe tangled academic prose. What makes this book such a joy is not just the breadth of scholarship and the shrewd conclusions, but also the clarity of the prose. Even if you are not familiar with Dante’s works, the liberal quotations here will bring it to life and perhaps inspire you to explore these two works armed with your new understanding.

One thought on “Dante’s Tears: The Poetics of Weeping from Vita Nuova to the Commedia, by Rossana Fenu Barbera”