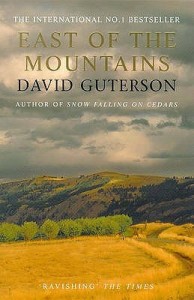 In this second novel from Guterson, Ben Givens is packing for a hunting trip. A 73-year-old retired heart surgeon, he has recently lost his wife and been diagnosed with terminal colon cancer. He stopped hunting after his experiences as a young man in WWII, but now has decided to take one last trip with his two dogs. Knowing what is coming for him, what he really intends to do is to stage an accident that will take his life.

He chooses the area around Wenatchee, Washington, just over the mountains from his home in Seattle. It’s the area where he grew up, hunting with his father and working in their apple orchards, and he knows he can find a remote place where his body won’t be found for a while. The two dogs he’ll set free to manage as best they can in the wild.

I started this book soon after it came out in 1999. I’d enjoyed Snow Falling on Cedars and looked forward to this book. However, I rather quickly got bored and abandoned it.

Almost twenty years later, I thought I’d give it another try. Again I found myself laying it aside. Finally, though, I persisted and made it to the end, curious to figure out why I wasn’t more interested in the story.

One reason is that I just didn’t believe in the protagonist. He wasn’t like any surgeon I ever knew and I’ve known a few. In fact, his life as a surgeon seemed to disappear after its first mention and not really come back until the end of the book. He could have been anyone: a cowboy, a marine, a taxi driver.

In fact, he seemed to be no one; I didn’t get much sense of him as a person. I had even less sense of the other, minor characters.

And that’s the third reason I was tempted to put the book aside. The story lacks tension. There’s not much suspense. A couple of bad things befall Givens, but he’s planning to kill himself anyway, so it’s hard to care.

On the plus side, Guterson’s descriptions of the land along the Columbia River are gorgeous. One of the great joys of reading is being transported to a distant place. The author’s evocation of place kept me reading.

I rather liked a part near the end when Givens actually has to interact with people. But then a deus ex machina suddenly lifts him out of the problems he’s gotten himself into, letting what little tension had built to evaporate.

A lot of people liked this book, and there were certainly parts I enjoyed. However, for me it was mostly a good lesson on crafting a page-turner.

Have you read a novel where the setting was more interesting than the characters? That is not necessarily a bad thing!