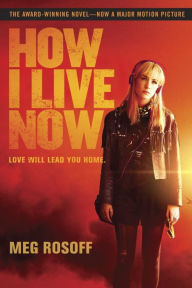 As the story begins, fifteen-year-old Daisy arrives in England, sent by her father and new stepmother to visit Aunt Penn, sister to Daisy’s mother who died when Daisy was born. The teen loathes her stepmother, who is pregnant, saying, “If she was making even the slightest attempt to address centuries of bad press for stepmother, she scored a Big Fat Zero.”

Daisy’s voice is the best thing about the book—surly, smart, funny and vulnerable. She’s met by her fourteen-year-old cousin Edmond, who is not only smoking a cigarette but has brought a “falling-apart” jeep in which he will drive her home.

Thus begins her adventures with her charmingly eccentric cousins in an old house in the countryside. Aunt Penn who is important in the government, leaves almost immediately “to give a lecture in Oslo . . . on the Imminent Threat of War.”

Daisy pays little attention to war-talk, since people had been yammering about the possibility for the last five years, though her oldest cousin Osbert can’t get enough of the latest news. She spends her days with Edmond, his twin Isaac, and their little sister Piper, and assorted dogs, goats and other animals. They fish and swim and picnic.

Then comes the invasion.

This is when the film blew me away. Watching it without knowing the story at all, I thought if a war came, it would be like the Land Girls or children being moved to the countryside during the Blitz, as in Lissa Evans’s Crooked Heart.

I was wrong. The images of rural England occupied by an enemy force—villages turned into military encampments, cars abandoned on country lanes for lack of petrol—shocked me deeply. And, to my shame, showed me just how superficial my empathy is for other countries trapped by warring armies: Sarajevo, Aleppo, so many others. Not England, I kept thinking.

I’m glad I went on to read the book. Not only is it more detailed and nuanced—movies must necessarily leave out much of what’s in a book—but Daisy’s voice is so true as she tries to keep her head above water, waters that get deeper and more treacherous as the story goes on. I felt I experienced every minute with her, every shifting emotion. We are all flawed beings; Daisy is no different, yet in rising to the occasion she finds an unexpected heroism. I felt privileged to spend these pages with her.

Have you read a book recently that showed you something new about yourself, perhaps something you’re not proud of?