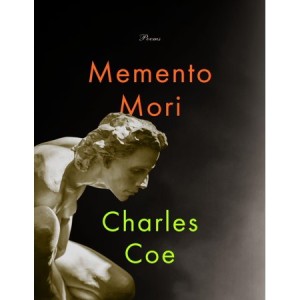 I heard Charles Coe read from his new collection at the Brattleboro Literary Festival and had to take a copy home with me. Coe is a teacher and an award-winning poet, designated “A Boston Literary Light” by the Associates of the Boston Public Library. The poems he read that day celebrated ordinary days, finding treasure hidden in plain sight.

The poems are those of a man no longer young, one who has looked at his own mortality and chosen to live every day, every moment; a man who wishes he could go back and give advice to his teenaged self about what really matters.

Coe is also a jazz musician and his musicality comes through in every line. His experiences and knowledge of jazz rhythms come through especially in several poems about musicians where he explores the peculiar doubleness of performing: the invitation to the audience to respond and the physical, intensely personal, rapt absorption in the playing itself.

He writes movingly about Boston, by which I mean Boston and its surrounding towns, taking a moment on a stalled subway train, for example, to illuminate the peculiar raggedness of a New England winter and the moments that can lift us into the universal.

Long ago, with other young friends, I visited an older man we knew in New York City who took us on a peculiar tour. “Don’t look at anything until I tell you to,” he said, leading us to one odd and beautiful space after another: corners, pockets, a particular painting. In the same way, Coe’s poems celebrate the secret delights of city life. One such is “The Dance Hall of Porter Square”, inviting us to share a sweet moment among the street people gathered there.

Using humor as seasoning, he can pull the rug out from under the reader, turning our laughter to thoughtful frowns as the reversal sinks in. Even “The Saga of the Fish Sticks”, which is even funnier than its title, takes us back to the theme of his title poem and of this collection.

He includes a few prose poems, which use the syntax of prose but have the imagery, compression and music of poetry. An example is “The Night My Sister Danced with a Mouse”, a retelling of a family anecdote taken to a higher plane by the use of an image reimagined in the course of the piece. With humor and minimal but precise details, Coe brings us into this scene to relive it with him, and be warmed by it.

As with some of the best poems, Coe’s work draws our attention to something so small and ordinary, perhaps even ugly, that we would normally overlook it. He invites us into the fullness of the moment, unfolding the lotus to reveal the heart. Here is one such poem quoted in full:

It is sometimes necessary
to walk along a moonlit riverbank
barefoot, on the sodden strip
where water meets land,
to remind oneself
that something in the mud
remembers the stars.

Have you read poetry that made you see the world with new eyes?