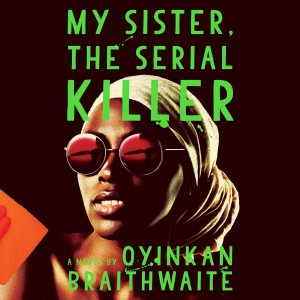 Don’t be put off by the title of this brief but powerful debut novel. I myself hesitated, wondering if it would be sardonic humor or a grotesque butchers’ ball, but was persuaded to read it by one of my book clubs. I’m glad I did!

This is the story of two sisters. In the first chapter Korede, our narrator, gets a call from her younger sister, the beautiful and pampered Ayoola, asking for Korede’s help in cleaning up after her latest murder. This is the third one, leading Korede to note that her sister has now met the definition of a serial killer.

Not that Ayoola believes she’s a murderer. No, these are boyfriends who threatened her in some way and she pulled her knife in self-defense. The knife was their abusive father’s proudest possession which Ayoola helped herself to after their father’s untimely death.

Despite the title and this first chapter, the story is very much grounded in Korede’s everyday life. It’s more about family dynamics and personal worldviews than about violence. As one person in my book club said, “. . . there are rich veins to mine when you take ordinary, commonplace conflicts and amplify them to the extreme.”

So far from resenting her sister’s favored status, Korede has made it her mission to protect Ayoola, though of course we only get this through Korede’s eyes so she could be deceiving herself or us. But the crisis comes when the handsome young doctor at the hospital where Korede works, the doctor she has been trying to attract, catches sight of her irresistable sister. Should she warn him? Or will she continue to enable her sister?

The Nigerian author is also a poet, so it’s not surprising that she brings a poet’s use of compression and white space to this novel. What is astonishing is how effective it is. Each short chapter burns with purpose. There are no subplots or plot layers to distract us. Characters other than her sister and the young doctor are not presented as complex, which makes sense because we see them only through Korede’s eyes and she is focused, laser-like, on the two of them. As another person in my book club said, “For that reason [her succinct prose], the story delivered a sense of smooth, inexorable movement toward its resolution.”

Korede’s deadpan voice gives us her character: practical, straight-forward, a little OCD about cleaning. Eventually we begin to question her reliability. Was the father’s death an accident? Isn’t her protectiveness toward Ayoola laced with some other emotions? Does she care more about the idea of protecting her sister than for Ayoola herself?

There is good, if understated, use of symbolism and setting. Korede keeps coming back to the idea of the third bridge under which the sisters disposed of the body in the first chapter. The bridge isn’t described; it’s more the idea of it. I’ve mentioned the knife as a symbol, but there are others, such as the use of flowers and the bleach Korede uses to clean up the blood.

There are glimpses throughout the novel of conditions in Nigeria, such as an interaction with the blatantly corrupt police at one point, or the accepted patriarchal system. Also, a third person in my book club mentioned that “ . . . there’s a whole genre of Nigerian films that feature over-the-top, comedic violence, with the strength of the family prevailing in the end.” This idea gives me a different perspective on the novel and how it fits within its cultural context. From within my own context, though, I saw the humor but concentrated on the co-dependency of the sisters and Korede’s ethical dilemma.

Expanding further, while ostensibly about the relationship between the two sisters, the story can also be read as a comment on today’s inequality: the gap between the pampered one-percenters, so entitled that they can lie, abuse and rape with impunity, and the rest of us, beaten down by the treadmill of getting by while we labor to provide their goods and services. Since they pay almost nothing in taxes, with miniscule tax rates and generous offshore hideaways, the tax burden is left to us.

However you read this story, you’ll find much to think about and discuss with friends.

What would you recommend as a good book club choice?

2 thoughts on “My Sister, the Serial Killer, by Oyinkan Braithwaite”