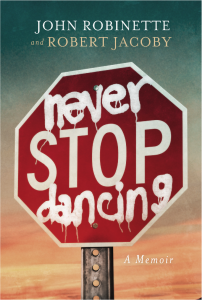 An ordinary man at work on an ordinary day sits through the regular weekly meeting, gets a soda, talks with a co-worker. Then he hears someone say, “That’s John.” And sees a police officer looking at him.

On that clear and beautiful April day, John’s wife Amy was knocked down by a truck as she crossed a street and died.

His close friend Robert, a journalist and author of two books, wanted to help, but what can you do? What can you say?

What Robert did was suggest that he interview John several times over the course of the next year, John’s first year without Amy. Because their friendship included an openness and sharing considered unusual between men, Robert hoped the interviews would give John a safe space to talk about his feelings. He also thought that someday John’s two young children would want to know more about this first year without Amy, and that perhaps “John’s grief might inform others’ grief—how they manage it, how they talk about it, and how they process it—and, ultimately, how they move on.”

And Robert himself, not unacquainted with loss and grief, was curious:

In this powerful, if sometimes wrenching, joint memoir we move between Robert and John’s voices. Emotions are laid bare; the small and large moments—cleaning out Amy’s closet, signing the children up for Little League—are exposed. Robert says, “It felt like we were opening up the brutal places of human existence and emotion, holding things up for discovery and examination.”

Both John and Robert are smart, articulate and curious. They wrestle with the questions most of us struggle with in our lives: Who am I? Why am I here? What happens to us after we die? Why do bad things happen to good people? Does religion offer answers and comfort or just empty promises? Does grief ever fade? And if it does, have we betrayed our loved one?

It’s a remarkable book. John and Robert’s startling honesty and candor, holding nothing back, can’t help but open our hearts and ease our own empty places.

Most poignant are the scenes with John’s two young sons, four and seven, as they try to come to grips with their devastating loss. As John later says, he may someday find someone else to love and share his life with, but “My boys can never have another mother.”

Another devastating but comforting scene is when ten members of John’s church come to his home to sit with him shortly after Amy’s death. Curled on the floor, overwhelmed by grief, John feels them silently touching him, holding him. A laying on of hands. Held in that love and compassion he is able to find calm.

I’m grateful to have had the opportunity to step into the lives and hearts of these two men. Their story made me feel I’d opened the box and everything flew away except for one thing, and that one thing was love. By opening themselves to each other, John and Robert invite us into their community, to hold each other in love and compassion and to find peace.

Have you read a memoir that made you feel a part of something larger?