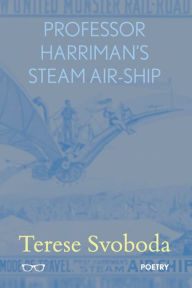 The poems in this new collection by Terese Svoboda get to the heart of what it means to be human. I wrote a woman at first, but I think their truths transcend gender. Allusive, often playful, they are deeply moving.

Take the first poem, “Whose Little Airplane Are You?” With light but deft touches, she conjures a mother speaking of apricots and clouds and planes, as though in answer to the question What was it like when I was a baby? She apologises for all she had not apprehended then. Yet the immense love comes through, together with the hint of threat that the image of planes coming out of clouds now holds for us.

In “The Talking Tea-Kettle” an enchanting and amusing discussion of spiritualists and their debunkers is sprinkled with calls from a daughter trying to connect with her mother.

Other poems take us into different territory, such as “Orlando is Us” which imagines what it must have been like to be in that nightclub on the night of the attack. “Airport News” uses Dante’s Purgatorio to describe a flight, and will have any frequent flyer nodding and chuckling. Another intensely imagined piece has a father trying to find his son in a parking garage in “Boy on Crutches”. Others, such as “Baghdad Calls” and “Hope Wanted Alive”, speak to our fractured world.

The long poem that makes up Part III and provides the book’s title, looks at our race pell-mell into the future. With allusions, puns and other word-play, Svoboda takes us on a balloon ride of a marriage. She invites us to look at the space between concepts such as “Transportation as transport:/Court-ship.” With references to Spock, DNA, and the Jetsons, she circles around the idea of invention, the future, and the stories we imagine about them.

It is the last section that keeps bringing me back. She begins with the lines “No one imagines/night at noon.” With compelling imagery and concrete details, like gingko trees and the triangle on the Play button, these poems of a loss conjure in us, not just the memory, but the experience of our own losses and help to heal them.

I’ve written before about Svoboda’s earlier collection, When the Next Big War Blows Down the Valley, and Anything That Burns You, her incredible biography of the influential but now mostly forgotten Modernist poet Lola Ridge. This new collection builds on the strengths of those earlier works. If you enjoy word-play and are ready to be moved, I encourage you to explore these poems.

What poem have you read recently that moved you?

Disclosure of Material Connection: I received a digital copy of this book free from the author. I was not required to write a positive review. The opinions I have expressed are my own.