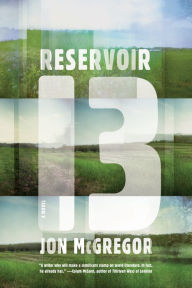 McGregor’s latest book is not for everyone. There are no car chases or spies or broken-down police detectives. There isn’t even a traditional protagonist. Reservoir 13 is the story of a village in the Peak District and its surrounding countryside. It’s a story about time, stretching over 13 years with each chapter covering a single year of the village’s life.

In quiet, exquisite prose, McGregor immerses us in this life. Holidays are celebrated, with fireworks at New Year’s and Guy Fawkes Day and a pantomime at Christmas. The agricultural life of the village goes on: haying, getting the cows in for their evening milking, looking for the sheep lost in a snowstorm. Hawthorne blooms; voles burrow under the hedges, fox cubs play outside their den.

Townspeople appear and reappear: a family who get called away from their sheep farm to rebuild bridges knocked out by storms and to do other heavy work around the village, a woman who is barely keeping her head above water caring for her autistic son, a man who visits his aging mother at Christmas and tries to avoid meeting up with his sisters, a woman who helps her elderly neighbor by walking his dog, and many more. In the course of the 13 years we follow children growing into their young adulthood, pairing off, breaking up, finding new loves.

At first I was afraid that I would have trouble following all these different characters, but in fact I had no problem keeping them straight. The author always provided small but necessary clues to remind me of who the person was and their relationship to others.

My only criticism of the book—and it is partially of the author and partly of the publisher—is that it begins with the disappearance of a 13-year-old girl. She and her parents, who are staying in the village over New Year’s, go for a walk and somehow get separated. By starting this way and by the promotional material, it sounds like it’s going to be a mystery, but it is not.

Instead, it is an examination in part—and only in part—of the effect of this event on the life of the town. As you can imagine, while the disappearance dominates the first year, over 13 years it begins to fade to an occasional memory, however much some individuals are changed by it.

The misleading description of the book as being about the girl’s disappearance sets up expectations that detract from the real pleasures to be found here. I almost came to see the disappearance as a clumsy attempt to start with a bang, in media res as we writers are advised to do. Yet nothing else here is clumsy.

I listened to this book. Some stories are better suited for audiobooks than others. I think I would have enjoyed reading it as well, but listening to it provided a sweet, almost trance-like pleasure. I started listening to it on a road trip but it was a little too quiet. However, during peaceful times at home or those sleepless hours in the middle of the night, it was exactly the right thing. I must have listened to it four times over by now. I even go back to chapters out of order now that I know the story. I never tire of it.

I love the rhythm of the year, the description of nature’s cycles, and the cycles of peoples lives: divorces, deaths, first loves. One of McGregor’s techniques to reinforce these cycles is to repeat certain phrases or sentences with slight variations. I love the image of the river that runs through town that turns over itself under the bridge and carries plumes of dirt over the weir. It reminds me of the quote from Heraclitus (as translated in my edition of The Oxford Dictionary of Quotations) “You can’t step twice into the same river.” We see the four children we see grow into young adults trying to do just that as their own personal ritual. Another interpretation of Heraclitus’s thought

. . . is not that all things are changing so that we cannot encounter them twice, but something much more subtle and profound. It is that some things stay the same only by changing. One kind of long-lasting material reality exists by virtue of constant turnover in its constituent matter. Here constancy and change are not opposed but inextricably connected. A human body could be understood in precisely the same way, as living and continuing by virtue of constant metabolism–as Aristotle for instance later understood it. On this reading, Heraclitus believes in flux, but not as destructive of constancy; rather it is, paradoxically, a necessary condition of constancy, at least in some cases (and arguably in all).

McGregor’s remarkable story embodies this paradox. It is told in both linear and circular time—a remarkable achievement. The mystery here is not so much the disappearance of the girl, but the mystery of time, the center of this paradox of change and constancy.

This is not a book to rush through. It is a book to savor. it happens rarely, but sometimes I will read the first page of a book and think to myself: OK stop. You need to slow down and take your time and enjoy every second of reading this book. It almost never happens, but it did with this book.

Have you read a book that you just want to read over and over?