Aside from celebrity memoirs, most memoirs published these days are highly polished stories that read like novels. That is, they incorporate many of the elements of fiction, such as characterization, setting, story structure, and theme.

Especially the latter because it is usually only the exploration of a larger theme that a memoir by a non-celebrity can capture the interest of the reading public. Yet there are other reasons to explore memoirs. One is that these first-person narratives can take us into worlds foreign to us, enhancing our empathic abilities by allowing us to see life through someone else’s eyes.

Another reason is that memoirs can give a voice to those who have none. That was the mission that drove me to write my memoir of my time on welfare: I wanted to counter media stereotypes of welfare recipients by telling true stories of my experience and that of people I knew.

It’s also the reason why I value so highly this new memoir from Geraldine DiNardo, co-founder of the Mustard Seed, a Catholic Worker house in Worcester, Massachusetts.

After giving a brief history of the Mustard Seed and the Catholic Worker Movement in the Worcester area, DiNardo turns to the meat of the book: individual portraits of people who lived or worked at the house during DiNardo’s years there. Each portrait is brief, followed by a poem addressed to the person. Without shying away from their faults, DiNardo finds a way to celebrate each one and bring out some detail that makes the person come alive for the reader.

My favorite is Mrs. Elizabeth Fish Kennedy Fish, a name she chose for herself. An amazing seamstress, she made elaborate and beautiful outfits for herself and others by hand, all covered with words and phrases written in Magic Marker. Schizophrenic and sometimes combative, she was protected not just by the Mustard Seed people but by the whole neighborhood. In one instance she managed to get herself lost in a distant town, but had the phone number of the Pickle Barrel, a neighborhood restaurant. Employees left work to find and bring her home.

Many of the stories here are comic; all are in some way tragic. Indeed, all of us are damaged in some way; all of us have griefs and troubles. Many of DiNardo’s saints and rascals have passed away, most far too young. I saw that, too, when I went to look up people I’d known. Recently, a study was done to show life expectancy by neighborhood in Baltimore, where neighborhoods are closely tied to socio-economic status. It ranged from 67 in poorer neighborhoods to 81 in wealthier ones.

I first learned about the Catholic Worker Movement while I was living in Worcester in the 1970s (note: I knew of the Mustard Seed and met DiNardo, but was not closely associated with either—something that I now regret). Started by Dorothy Day in 1933 during the Depression with the assistance of Peter Maurin, the movement asked people to live according to the tenets of Jesus Christ. In practical terms this meant providing food, shelter, clothing and a welcome to those in need. In addition to Catholic Worker houses, a newspaper still published today, and Catholic Worker communities that are active in social justice, civil rights, and labor issues.

I was deeply moved by the idea that someone could actually live according to her principles. Dorothy Day is still the greatest of my heroes. Living as I did among the lesser-privileged citizens, I knew just how hard her work and that of had to be—no rose-tinted glasses about the needy for me. I’m not surprised that DiNardo eventually had to back off from the Mustard Seed; she’s still involved but not to the extent she had been.

I’m grateful to DiNardo for these portraits. I’ve always thought it a uniquely New England quality—though I expect I’m wrong—this stubborn going on when there doesn’t seem to be any hope, this scraping by somehow when you have nothing. I treasure it, as I do these stories. The book is free but contributions to the Mustard Seed are welcome (PO Box 2592, Worcester, MA 01613).

Have you read a memoir that introduced you to a world new to you? 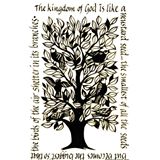