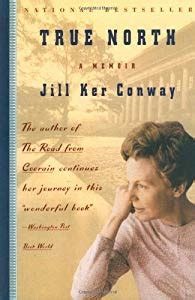 This sequel to The Road from Coorain begins in September of 1960, as Conway travels from Australia to Harvard University in Cambridge, Massachusetts, where she will be a graduate student. She says:

The future of a woman alone in the world and the 1950s was a blank page, because no one I knew had lived that way, and the rules of the culture were clear that they shouldn’t. So I experienced my leave-taking as a farewell to the known, a jump off the edge of the world into an unknowable future.

From the weather to the customs—such as dinner being served at 5:30 pm, the time for nursery tea back home—she has to find her bearings in this new world. I love her descriptions of Cambridge, such as:

It was old, by any standard, and sparer, in a fashion I could not quite comprehend, than any urban landscape I’d yet seen.

I’d never thought there could be beauty in a pallet of gray and white, but suddenly I could see in the low slanting light, the bare branches, and the gleaming snow of an early winter afternoon images I’d seen before in a Rembrandt drawing but never properly understood.

She is buoyed up by the “easy good manners and cordiality” of the people she meets. She quickly finds herself in a group of like-minded women, most of them a year ahead of her. Best of all are the courses she plunges into for this next phase of her scholarly career. She adeptly describes the excitement of the ideas in her seminars and the individuals teaching them.

As a teaching fellow in her second year, she finds herself working for John Conway, a war veteran from Canada. Although she comes to their first meeting “prepared to be very businesslike,” they quickly veer into discussing their “shared experience of a first encounter with the United States.”

Reader, she marries him. Then he gets an irresistible offer to be on the faculty and a master at one of the colleges at York University in Toronto. They agree to take turns: ten years for his career, ten for hers, and they move to Canada. It is a good move for her as well. She becomes involved in college administration and, at the end of this book, is invited to become president of Smith College in Northampton, Massachusetts.

I loved her descriptions of Toronto as well, where she has to adjust to a longer winter. Her insights into the Canadian view of the U.S. also intrigued me.

Unfortunately, she encounters some of the same prejudices she’d left behind in Australia. In fact, this last aspect became one of my greatest rewards in rereading this book. As she details her strategy for getting equal pay for herself; then all women faculty at the university, and then the other women working there—secretaries, lab technicians, cleaning women, career counselors—I remembered all those hard-fought battles, the ones we seem to be having to fight all over again.

She also talks about her work as a historian, writing about women’s roles, how they changed, and how the women themselves perceived their roles. Fascinating.

I’m eager to move on to A Woman’s Education, Conway’s third memoir, this one about her time at Smith College and one I’ve not read before. These books not only bring to life specific times and places, they chronicle the inspiring life of one woman on the cusp of major changes in our culture. Even better, they encourage the reader to consider and reconsider ideas and, perhaps, memories that speak to the issues we are struggling with today.

Have you read a memoir or biography that seems extraordinarily relevant today?

Mary Anning lived for her whole short life in Lyme Regis on the south coast of England. Born into a working-class family—her father was a cabinet-maker—Mary started while still a small child helping with the family’s sideline of gathering fossils from the cliffs that stretched along the shore. These were sold to tourists for much-needed income.

As a child, Mary’s claim to local fame was that she had been struck by lightning while only a little over a year old and survived, unlike the woman holding her or the two other children nearby. Chevalier imaginatively uses this incident as a source of much that is different about Mary, such as her remarkable eye for spotting fossils.

Chevalier’s novel is historical fiction, but Anning was a real person who lived during the first half of the 19th century. So was Elizabeth Philpot, a lady of limited means who moved with her sisters to Lyme Regis. While looking for the pretty stones she did not yet realise were fossils, Elizabeth became friends with young Mary even though she was 20 years older.

The story is really about their friendship, a peculiar one not only because of the difference in their ages and circumstances, but because of their shared rejection of the customs of the day. Climbing around on the cliffs digging out fossils and reading scientific treatises about them were not approved activities for women of any class. Mary taught Elizabeth how to recognize fossils in the shale and limestone of the cliffs, while Elizabeth taught her how to read and write and also shared with her the scientific papers that she found.

Gathering fossils was dangerous work because the cliffs were unstable. As the ground crumbled during storms, new fossils were exposed, but the two women were always in danger of being buried by a landslide. It was also dangerous because at the time the very existence of fossils was disputed because they repudiated the prevalent literal understanding of the Bible by suggesting not only that the earth might not have been created in a handful of days, but also that God may have allowed some of his creatures to die out. At that time it was believed that God watched over his creatures and could not have made a mistake or allowed any of them to become extinct.

Completely self-taught, Anning became a significant figure in the history of science. We follow her footsteps as she discovers an ichthyosaur skeleton—she was the first to suggest that it was not a crocodile, but something that must have lived long ago—as well as two complete plesiosaur skeletons and a pterosaur skeleton. She and Elizabeth also find important fish fossils. Elizabeth’s significant contributions later led her nephew to build a museum originally named after who her that later became the Lyme Regis Museum. Part of her collection is in the Oxford Museum of Natural History.

Amateur fossil hunters and prominent geologists of the day not only consulted Anning, and but also asked her to lead them on fossil hunting expeditions on the cliffs. Some of the men whom she helped took credit for her, finds but towards the end of her life this misrepresentation was corrected and her accomplishments began to be recognized.

While I’m delighted to have these two foremothers’ stories brought out of obscurity and introduced to a popular audience, I do have some qualms about historical fiction in general. Because so little is known about the details of their lives, there is ample room for a novelist’s imagination.

However, when we are talking about two women who actually lived, I have reservations about taking the liberty of adding to their stories. We can guess at their likely motivations, but the author herself admits that she made up some events that I believe the women would not thank her for. Of course, after we’re dead and have no one to speak for us, we have no control over our own stories. At least Anning has not been featured in a commercial dancing with a vacuum cleaner like Fred Astaire.

Still, Chevalier has done a great deal of research and written an engaging book. She has also done a great service in bringing out the inspiring story of these two women.

Have you recently learned about an area of women’s history that was new to you, perhaps through a book or a film?