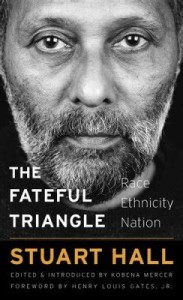 It’s actually all about race, I often find myself thinking as I read the euphemisms and cover stories promulgated by blustering politicians and repeated by their supporters. Growing up in a racially mixed city in the U.S., coming of age during the civil rights movement, I learned the code words and recognised what was really meant. It was so clear to me that “poor people” meant people of color that when a new friend told me she was on welfare, I blurted out, “But you’re white!”

As Lewis Carroll wrote in Through the Looking Glass:

“When I use a word,’ Humpty Dumpty said in rather a scornful tone, ‘it means just what I choose it to mean — neither more nor less.’

’The question is,’ said Alice, ‘whether you can make words mean so many different things.’

’The question is,’ said Humpty Dumpty, ‘which is to be master — that’s all.”

You might think that this collection of talks given at Harvard in 1994 by Stuart Hall couldn’t be relevant 25 years later, but nothing could be more germane to what is happening today. Hall, a prominent intellectual and one of the founding figures of cultural studies, examines the three words in his subtitle and how their meanings—how we understand them—have changed over time.

In examining these three terms of cultural difference, Hall uses Saussure’s concept of the linguistic sign, which is that language, each word that we use, that sign has two parts: the signifier which is what we hear and what is actually signified, i.e., the abstraction behind it.

Thus, the title of the first part is “Race—The Sliding Signifier”. In this talk he examines how what we understand by the word “race” has changed over time, yet retains echoes of its earlier meanings. He finds these changes in what is signified by this and the other two terms by looking at public discourse, saying:

As we set out to ask what it means to rethink cultural difference in discursive terms, discourse should be understood as that which gives human practice and institutions meaning, that which enables us to make sense of the world, and hence that which makes human practices meaningful practices that belong to history precisely because they signify in the way they mark out human difference.

These three lectures are obviously not light reading, but they are immensely rewarding. Hall also invokes Saussure’s theory that our words do not operate independently; instead they are part of a web of meaning, related to other words, a systemic model. These three concepts are central to the process of classifying difference in human societies. And this system is hierarchical. It’s all about power or, as Humpty Dumpty says, who is to be master.

By looking at how the discourse around these three terms has changed over time and what lies behind those changes (see what I did there?), Hall challenges us to consider how these terms can slide in the future, as we look at the things that are changing our culture such as globalisation and mass diasporas, which are leading to a “weave of differences” rather than a binary (e.g., black versus white) definition of identity.

He says (italics the author’s), “The question is not who we are but who we can become.”

Who can we become?