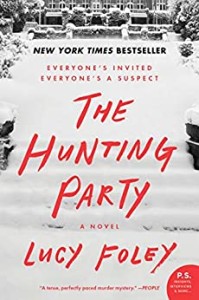 For their annual New Year’s reunion, nine friends travel to a remote lodge in the Scottish Highlands. It becomes even more remote when cut off by a massive blizzard on New Year’s Day, just as Heather and Doug—the two staff who live at the lodge—discover the body of the missing guest.

The bruises on the neck indicate murder, which means the murderer must be one of the people at the lodge, though there is a serial killer on the loose and the possibility of local poachers. The lodge sits on a loch far from the nearest town, with only three staff: Heather the manager, Doug the gamekeeper, and a third staff person who lives in the now-inaccessible town. For this weekend, the exclusive lodge has only two other visitors: an Icelandic couple who keep their distance from the rowdy group of friends.

In their thirties, the nine of them are starting to pull apart, mostly because of the changes that come with aging. The tensions between them become obvious on the train from London. Katie and Miranda have been friends since childhood, Miranda the queen bee who enlivens any gathering and Katie the plain friend. Seven others congregated around them at Oxford: Julian, now married to Miranda; two couples—Giles and Samira with their new baby, Nick and Bo—and Mark who always had a crush on Miranda. The ninth is Emma, Mark’s girlfriend of three years. She’s the one who organised this plush weekend.

The settings—the loch, the trails up the mountain, the glass lodge, individual cabins, the relentless snow—are beautifully and vividly described. Foley keeps up the suspense, not only about who the murderer is but who has been murdered. The suspense is also fed by the gradually emerging backgrounds of the characters. They have secrets, as do we all but some of theirs are pretty ugly. Old resentments, betrayal, and shifting alliances cloud the air.

The narrator changes with each chapter, giving us different insights into all the characters. There are flashbacks filling in the characters’ backgrounds and illuminating the difference between the accepted story about an incident and an actual memory from someone who was there.

I generally dislike multiple protagonists. I’m easily confused and they can blur together if the voices are not distinctive. Plus moving around keeps me from bonding with any one character, though that may not be a bad thing in a locked-room story like this, where anyone could be an unreliable narrator. I can also get confused when, as here, chapters bounce back and force between several time periods, in this case the several days around New Year’s.

I wasn’t confused here, though. Each chapter immediately clarifies who is speaking and what day it is. Also, I listened to the audio version which has a different actor for each point-of-view character, so it was more like listening to a play. Their voices did the necessary differentiation; I don’t know how well it would have worked if I’d read the book.

It’s been promoted as a classic locked-room mystery, which it is. I found the puzzle interesting; the characters less so. If you saw gamekeeper and thought D.H. Lawrence, you wouldn’t be far wrong. If you saw queen bee with plain friend and thought of stereotypes, you’d be on target, not just for those two but for everyone.

Beyond that, I simply could not work up sympathy for any of them, especially the nine friends trying to clutch at their youth, their golden days at Oxford. Drinking too much, taking pills, playing childish or teenage games, making risky impulsive decisions: maybe I’m just not the right audience for such characters. On top of that, some of the more extreme antics—no spoilers—seemed implausible to me. The person would surely have died or fallen into a coma.

Still, I enjoyed the twists and turns of the story. Some I saw coming; others took me by surprise. And I loved the descriptions of the loch and surrounding forests.

Do you like a good locked-room mystery? What’s one you can recommend?