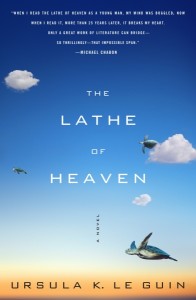 I read a lot of science fiction in my teens, mostly because my older brother was into it and let me raid his library. Then I read a lot of scifi/fantasy in my late twenties; I was in a difficult place and wanted to be anywhere else. It helped. So during this tense and terrifying week, I returned to that strategy. It’s been long enough that those books are ripe for rereading.

This 1971 novel begins with a man waking up amid fallen concrete blocks feeling dizzy and nauseated. Eventually a medic brings him around, shocked by how many different meds the man had taken.

George Orr has been taking multiple medications to keep himself from dreaming, because his dreams come true—literally. Not all of his dreams, but now and then he has what he calls an “effective” dream and when he wakes, the world has changed to conform to that dream. And he is the only one who knows that has happened; he is the only one who remembers the way the world was before.

As a result of his overdose, he is sent to Dr. Haber, a psychiatrist working on a machine similar to an EEG that can control the type of waves in a patient’s brain to induce dreaming. Over the course of the book Haber uses his machine coupled with hypnotic suggestion to try to instigate and control George’s dreams. But the effect is usually unpredictable and sometimes catastrophic, because dream logic comes up with its own way of implementing Haber’s directions.

One constant, though, is that with each dream Haber gets a promotion and more power. He claims he only wants power in order to help people by solving the terrible problems in society. But Haber’s vision of an ideal society is a little scary given his belief in utilitarianism and eugenics. Haber’s ability to implement his beliefs using George’s dreams combined with his own insatiable hunger for power and fame drive the world down a dangerous path.

We writers are advised that, along with hooking the reader’s attention, we should use the first page to teach the reader how to read our book. Make sure they know what genre it is. Identify the protagonist, their goal, and what or who is preventing them from achieving it. Give at least a hint of what themes will be explored. I have to say that rereading the first page of this book after finishing it changed the story for me and filled me with awe at Le Guin’s mastery of the craft.

What’s also interesting is how much Le Guin is able to explore different philosophies and approaches without slowing the story. In my workshops we’ve been talking about generating suspense, and she has definitely crafted a page-turner. George’s dreams and the new world each creates are fascinating. And often destructive, to the point where one wonders how this world can possibly survive.

Well, out of the frying pan, as my mother used to say. It felt like the story of the last four years, right from the first page: waking up to an unrecognisable world, one that has changed in catastrophic ways. Still, I’m glad I read it this week. And now things have changed again. Someone has had a good dream.

Do you read scifi/fantasy? Why?