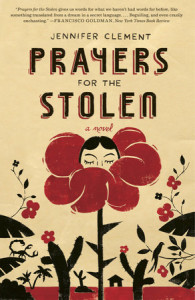 This is a novel. We are reminded several times that it is fiction. But it tells the truth about what happens to women and girls in a Mexico ruled by drug cartels.

Ladydi Garcia Martínez is such a girl. She lives with her mother in the mountains of Guerrero, in a place where there are no men. They have all gone to the U.S. or nearby Acapulco to work or joined the narcos. The mothers pretend their girls are boys for as long as possible to protect them from being taken by the narcos.

Telling her story in an irresistible voice, Ladydi gives us the world as she sees it. Everything that happens is, of course, the most natural thing in the world to her, whether it’s her mother’s sorcery, her friend Maria confronting a snake or finding a poppy field hidden in the mountains. She’s smart yet credulous, caring yet cautious, loyal yet curious.

Her mother is a force of nature. Furious at her husband for deserting the family—like most of the men who have gone to the U.S. he no longer visits and has stopped sending money—she dreams up ever more elaborate revenges. Her maxims and predictions seem cockeyed at first but then make sense in their own way.

Don’t ever pray for love and health, Mother said. Or money. If God hears what you really want, He will not give it to you. Guaranteed.

When my father left my mother said, Get down on your knees and pray for spoons.

The novel has one of the most shocking and fascinating first lines I’ve ever come across. The scene that it introduces sets the stage for the story to come. There’s humor as well as horror, but most of all a vivid evocation of what life is really like.

Clement grew up in Mexico City and from 2009 to 2012 was president of PEN Mexico. She spent ten years researching this story and the quality of her listening comes through in every nuance of the voices in this story, every detail of their lives. It’s a fascinating read, one that will engage and enrage you. The human costs of Nixon’s War on Drugs spread far beyond the prisons and streets of the U.S.

Writers often struggle with how to compose stories about social justice, hoping to rouse compassion and a will to change. It’s easy for our outrage to burst out in rants and prescriptive demands that overwhelm the reader. Here Clement shows us how to do it: just tell the story. Don’t tell the reader how to feel; just create a narrator with an original voice whose hopeful heart will touch ours. Add a dose of humor and a lot of specific detail to immerse the reader in the story.

This book’s sadness is outweighed by the strong social ties: between the girls, between the girls and their mothers, between all the women who have been stolen and sold and imprisoned. Their voices are rich and full of life even as they tell of horrors. Yes, I’m outraged, but the warmth and love, the intense community of women: these are what I’ve carried away from Ladydi’s story.

What novel have you read where the voice of the narrator pulled you in and wouldn’t let you go?