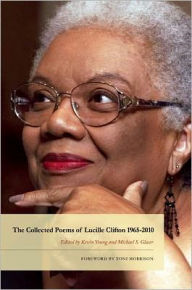 What a treat to reread Clifton’s poems, not to mention finding some new to me! I was thrilled when she was nominated as our poet of the month in my poetry discussion group. I’ve loved her work and been profoundly influenced by it since I first encountered it in the early 1970s.

What makes her work so astonishing to me is the way she uses plain language in what are often quite short poems and yet addresses complex themes. Moreover, she packs her poems with music and emotion.

when i feel her jump up and dance
i hear the music! my God
i’m talking about my nappy hair!

Another aspect of her work that astonishes me is how she holds her rage in check. It is there, in the poems about injustice and racism. But she finds ways to present it that enable us, even those of us with privilege, to participate in. There is, to me at least, always love in her poems as well, even the darkest ones.

Her sense of injustice may lurk under humor, as in this untitled poem that starts her first collection that begins:

in the inner city
or
like we call
it home

Another technique she uses is repetition. The lines quoted above are repeated at the end of that short poem, but by then we have a different slant on them. Or several different slants: as we discussed the poems, we found different meanings in them, sometimes because of the diverse life experiences we brought to them and often because Clifton’s lines are simply open to multiple interpretations.

She sometimes uses questions to enhance that openness and to invite the reader to participate in the poem. Sometime the questions even feel like a call-and-response, creating an unexpected resonance. For instance, each of the three stanzas in “the photograph: a lynching” is a question. Details, such as the woman who smiles and fingers a cross as she watches, arouse rage and a burning desire for justice but Clifton ends by asking:

is it all of us
captured by history into an
accurate album/ will we be
required to view it together
under a gathering sky?

Note the ambiguity in these lines as well. In our group we discussed various interpretations of “us” and “we” and “a gathering sky”. And if the latter portends a storm, what might that be? Also, the lynching itself is never described, only the audience’s reaction before the final question.

Her persona poems sometimes function as a container for rage or other complicated emotions. Another famous poem “jasper texas 1998” speaks from the point of view of a man’s head. Again, she does not describe the tragedy, leaving us the title and the dedication “for j. byrd” as sufficient clues. But speaking as the head in a voice that is measured and resigned gives us the opportunity to summon our own grief and outrage.

Many of the poems here are full of love and sometimes a wry understanding, especially those about her parents, husband, and children. This is also true of some addressed to all of us, such as her famous “blessing the boats” and this section from “the message from The Ones”:

they have learned to love you
and will keep coming

unless you insist on wings

Finally I am astounded by her prolific output. Parenting six children is no joke, even without the financial struggles. I know, too, from colleagues how generous Clifton always was with other poets, especially those just starting out.

As one person in my poetry discussion group said, holding this hefty volume—it is 720 pages—is like holding a life. What a privilege to be able to delve into a lifetime of work from this remarkable woman!

What is your favorite Lucille Clifton poem?