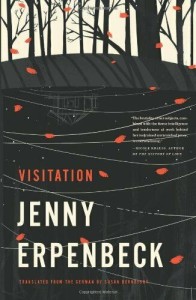 I’ve noted before in this blog the curious fact that books I pick up at random sometimes talk to each other in ways that deepen each of them. Lately I’ve found myself reading books about home and the wild and the border between the two.

Visitation highlights different aspects of last week’s book, Abigail, where the teenaged narrator is sent precipitously and secretly to a boarding school far away from the home she misses. The school, a former monastery, is vividly described, its stones, its curious doorways, its atmosphere of age and order. Part of her maturation is to make a home for herself in this bleak environment. Next week’s novel, too, is deeply engaged with these themes, but more about that next time.

The main character of Erpenbeck’s novel is a plot of land by a lake in Brandenburg, and the homes built there, especially a fabulously detailed home built by an architect in the 1930s. The architect comes up with details to enchant his wife: colored glass in the living room windows, a finial he himself carved, a secret closet, a wrought-iron bird in the balcony railing off the bedroom. The succession of people who live in this house and next door mirror the changes in East Germany during the ensuing decades.

At 150 pages, this novel is short but surprisingly intense. I found myself engaging with each character more than in almost any other book I’ve read for years, and this in spite of the way they come and go. The one constant person is an unnamed gardener whose chapters intersperse the others as he goes about his work of planting and building and chopping wood. We have no access to his thoughts and he doesn’t speak, yet I know and treasure him.

There is little dialogue and few dramatic scenes, making this an unusual read for me. It shouldn’t work, but it does. There are events that listed sound boring—locking up a house, sailing on the lake, drying off with a towel, noting the cost of things—but the focus Erpenbeck brings to each makes them a profound experience. Focus, details, and a voice that speaks of joyous and terrible things with a calm compassion.

The land was originally intended as the inheritance for one of the mayor’s daughters, but he instead divides the land and sells it. The idea of inheritance recurs, each time a little different, sometimes as the symbol of a family’s continuity, but more often of loss, as with the mayor’s daughter. There are many such spirals—a sentence, a scent, a key—each turn revealing a little more. They pull you in deeper, another reason why this short novel feels so intense.

Visitation reminds me of Reservoir 13, Jon McGregor’s beautiful novel about a village over a span of thirteen years. Both books make me think about what inheritances are passed on and what are lost, about the so-brief time that we inhabit this world that is our home, and how the earth itself, though changed, persists. Our cares and worries, even in this terrible time, will pass. Feel them and move on.

Do the books you read ever talk to each other?